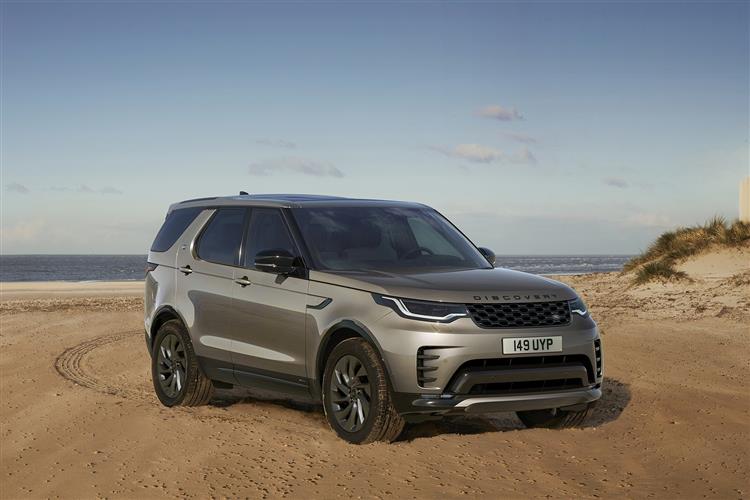 As ever, the Land Rover Discovery is the most practical and capable large SUV you could choose. Now the opposition has even more to fret about, courtesy of improvements to this fifth generation model. Jonathan Crouch reports

Without the Discovery model line, it's doubtful whether the Land Rover brand would even exist today. Launched back in 1989, the original version merely bolted more spacious bodywork onto an aging Range Rover chassis, but the sales it generated were enough to save the company. They also financed a more sophisticated five cylinder air suspended model in 1998 at the same time as the company's engineers were busily beavering away at something much better, third generation Discovery3 of 2004 which was ultimately developed into the Discovery4 of 2009. It took a further eight years before this more unusually-styled fifth generation model arrived, a car now thoroughly enhanced with JLR's latest MHEV electrified engine tech and media features. Potentially then, lots to look forward to.

There's still something very special about a place behind the wheel of a Discovery. In contrast to more car-like rivals, it's not a cockpit-like experience with all the controls angled towards you as they would be in, say a Range Rover Sport. No, this is different - a place of command: a place to do business with the elements, be they the snake-infested swamps of the rainy season in the Serengeti or the snarled-up traffic of a wet windy morning on the school run. This improved version of the fifth generation model gets a more capable Intelligent All-Wheel Drive system and Jaguar Land Rover's latest engine tech, all the units paired with a smooth and responsive ZF eight-speed automatic gearbox. Only the entry-level P300 four cylinder 300hp petrol variant does without electrified assistance. Otherwise, the brand's 48V MHEV mild hybrid tech features across the line-up's remaining three 3.0-litre six cylinder powerplants. Most will want one of the diesels, either the D250, which has 570Nm of torque and 249PS; or the D300, which offers 650Nm of torque and 300hp. There's also a six cylinder petrol variant, the P360, with 500Nm of torque and 360hp. All variants get impressive towing capability, the diesel variants offering a class-leading 3,500kg braking towing total. Plus Land Rover has developed clever technology to make this towing ability more accessible. Advanced Tow Assist is an ingenious development which allows drivers to complete potentially difficult reversing manoeuvres when towing trailers, caravans and horseboxes with ease. As before, there's class-leading off road ability thanks to permanent 4WD and the standard 'Terrain Response' system. An optional Configurable Terrain Response set-up allows drivers to fine-tune the Discovery's throttle mapping, gearbox shift points, steering and suspension settings to suit their preferences and requirements.

All the usual Discovery styling cues remain firmly in evidence - the clamshell bonnet, the stepped roof and the highly visible C-pillar. Visual changes to this improved Discovery are subtle. The signature LED headlights create a more purposeful look, plus there are animated sweeping front and rear indicators and a body-colour front fender vent. There are smarter signature LED rear lights too, which are joined across the back of vehicle by a new Gloss Black panel. Customers can also make their Discovery more eye-catching with an optional 'R-Dynamic' pack, which brings a revised front bumper and more purposeful Gloss Black and Shadow Atlas exterior accents. Inside, the key change is the adoption of JLR's latest 'Pivi Pro' centre-dash infotainment monitor with its bigger 11.4-inch full-HD touchscreen. This offers more immediate response, over-the-air updates, plus dual-SIM technology with LTE modems. It complements the 12.3-inch Interactive Driver Display digital instrument cluster screen, which can include a high-definition 3D navigation mapping. The steering wheel and gear selector have been re-styled too. The second row seats have been redesigned with longer, thicker cushions, better lateral support and careful seat profiling. But the fold-out third row chairs are no more comfortable than before. We like the Discovery's stadium seating configuration, which sees each row of seats positioned higher than the one in front, ensuring every seat is the best seat in the house. Unlike some of this car's 7-seat SUV rivals, the third row chairs are designed for adults as well as kids. Auto Access Height technology reduces the ride-height by up to 40mm as passengers prepare to enter or exit the vehicle. You can specify a gesture-controlled powered inner tailgate and even with all three seating rows upright, there's still 258-litres of luggage space. With the first two seating rows in place, there's 1,137-litres of room. With everything folded, that rises to 2,391-litres.

Prices start at around £52,000; that's for the base D250 diesel variant. You'll need around £4,000 more to graduate up to the gutsier D300. The base P300 petrol version costs around £53,000. There are three trim levels; 'S', 'R-Dynamic S' and 'R-Dynamic SE' and pricing rises up to around £65,000. There's also a Discovery Commercial van variant. A key standard equipment feature across the range is the 'Pivi Pro' infotainment system. And you're going to want to look at options like the 'Activity Key', a wristband that allows you to dispense with the usual key for when you're engaged in lifestyle country activities. Other key extras include a cabin ioniser, a head-up display and a gesture-controlled tailgate. There are various optional Meridian sound systems. And we'd also want Land Rover's Click and Go tablet holders, incorporated into the front seatbacks. The easy-to-use system also includes USB-A charging sockets that are perfectly located to minimise trailing wires. Using the onboard 4G Wi-Fi hotspot, which is capable of linking up to eight devices, rear passengers can be entertained on even the longest journeys. You should also consider the upgraded 'Terrain Response 2' driving modes system, which adds extra drive modes and a set-and-forget 'auto' setting.

It would be wrong to say that the MHEV mild hybrid engine tech has transformed this Discovery's running costs because it hasn't, but it's made a useful difference and has kept efficiency competitive. MHEV tech is based around use of a Belt integrated Starter Generator in the engine bay to harvest energy usually lost under deceleration, which is then stored in a 48V lithium-ion battery located beneath the rear load space. It's able to redeploy the stored energy to assist the engine under acceleration, while also delivering a more refined and responsive stop/start system. Let's get to the WLTP figures, starting with the diesels. Both the D250 and the D300 manage 33.5mpg on the combined cycle and 221g/km of CO2. It's a different story with the conventional P300 four cylinder petrol variant of course - 25.0mpg and 255g/km of CO2. Even the faster six cylinder P360 petrol variant does better (thanks to its MHEV tech), managing 26.4mpg and 241g/km. Of course, the driver will need to play his or her part in pursuit of cleanliness and frugality, selecting the 'Terrain Response' system's 'ECO' mode as often as possible and keeping an eye on the 'Eco Data' part of the infotainment screen. Here, you get various screen options. There's one that shows you the 'Energy Impact' of various electrical items. And another with so-called 'Eco Tips' that are supposed to improve your frugality. More useful is the 'Driving Style' display that marks your driving efficiency from 1 to 5 in three areas - 'acceleration', 'speed and engine' and 'braking' and gives you a percentage-based 'Driving Score' as a result. There's also a 'History' screen that graphically shows your recent efforts at frugality, awarding you a little trophy for your most economical journey.

The world takes on a different appearance from behind the wheel of a Land Rover Discovery. At the helm, you know you're in a car that can take on just about anything, be that a seven-up trip to the Alps or a relaxing ride home on a wet and slippery winter's night. But it's only when you put it through its paces in properly extreme terrain that the genius in its design becomes fully apparent. How can a car capable of such extremes on the rough stuff be so utterly easy to use on the school run? Only Land Rover knows. The more sophisticated design and clever in-car connectivity improvements of the enhanced version of this fifth generation model are welcome but ultimately, the recipe is as before. There's a clever, classless feel about this car that nothing else can quite replicate. Other rival SUVs claim to be tough but at the wheel, you're always a little hesitant to see them prove that. A Discovery's different, a uniquely capable SUV and a British success story that we should be proud of.

END_OF_DOCUMENT_TOKEN_TO_BE_REPLACED